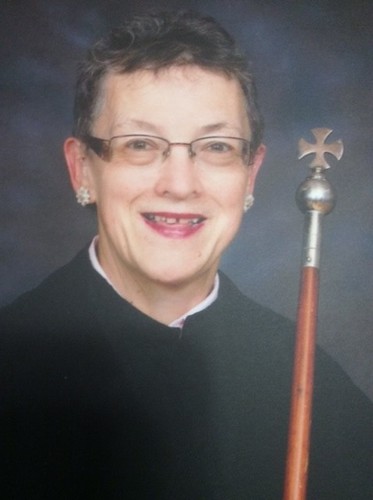 Jane is a cradle Anglican, and indeed a cradle St. Georgian, having been baptized (1949) and confirmed (1962) at the Cathedral. She attended the University of Guelph, and spent a year working in London England before going to the University of Western Ontario to obtain a Master of Library Science degree. After jobs in the public library systems of Toronto and Ottawa, she was appointed Chief Librarian for the City of Stratford in 1983 and joined the parish of St. James.

She was immediately able to achieve 2 childhood dreams: to sing in the church choir, and to serve at the altar. Over the years she served as Head Server, as Vestry Clerk , as Rector’s Warden, and on Parish Council. During this time she served on the parish Stewardship Committee and headed the task force on Strategic Planning for 2009 to 2013. Elected as a lay delegate to the Diocese of Huron Synod, she served on Diocesan Council and on the Cemetery Advisory and Archives Advisory Committees. In 2014, the Bishop appointed her as Honorary Lay Secretary of Synod.

In 2009, after a period of discernment and conversations with the Rector, Jane asked to be considered as Verger and was appointed that year. She was formally admitted as St James Verger by Bishop Terry Dance in 2010. In 2014, having completed their verger study program, Jane was admitted as a Fellow of the Verger’s Guild of the Episcopal Church. At St. James verger responsibilities included oversight of all lay ministries (Servers, Eucharistic Assistants, Readers and Intercessors, Flower Guild, hospitality), management of the church’s scattering garden God’s Holy Acre, acting as church librarian and archivist, and planning and MCing at worship services.

Since arriving at St. George’s, Jane’s duties have been primarily liturgical along with some Diocesan Committee work. Since the Cathedral resumed in person worship services, Jane has been responsible for management of the attendance records, a wonderful opportunity to greet and welcome parishioners every week.